1863: “How Completely Milroy Is Circumvented…”

I forgot to write last night; I was so busy getting my accounts right &c. &c. After prayer meeting I went to the Sutlers, & had a very successful time at Davis; he and Manning would have sold me the whole store, & Davis brought the bundles home, under his cloak, after night. How completely Milroy is circumvented; his orders are, that no citizen shall buy without a permit, & then, only a limited amount; I have spent hundreds of dollars at the Sutlers, without any permit, & they help me to carry out my plans. After the war is over, I will publish my account of it.

I have been so delighted with the exploits of the Queen of the West; after having captured her, we armed & equipped her, & captured, with her, the Indianola, the best gun-boat the Yankees have & opened the Mississippi to Fort Hudson, Hurrah! For our men, on land & sea. To-day has been very quiet; the Yankees say they have been fighting at Strasburgh yesterday & today, but I do not know the truth of it.

From January to June 1863, Winchester, Virginia, was occupied by Union troops commanded by General Robert Milroy. Milroy introduces a new brand of war to the Confederate civilians in the Shenandoah Valley – attempted coercion and retaliation. He gave orders that civilians could not buy food or supplies from the sutlers unless the civilians had taken an oath of allegiance to the Union; however, as Mrs. Lee records that order wasn’t always obeyed. (She busily bought and stockpiled supplies for the return of the Confederate soldiers.)

Other Milroy orders included curfew, quartering soldiers in civilian homes, “information lock-down” (trying to prevent any news from entering or leaving the town), and variety of other rules to annoy the Southerners. If Milroy’s plan was to punish the civilians into submission, it backfired – badly. Far from enticing or coercing the civilians to support the Union, Milroy’s strict measures made him one of the most hated generals in Winchester and Valley history.

To his defense, Milroy did attempt to help one group of civilians: African Americans. With strong abolitionist beliefs, Milroy enforced the Emancipation Proclamation and did his best to get the newly freed slaves to leave Winchester. While supporting and encouraging freedom was good, it did create some challenging situations when older slaves (now freed men and women) were hesitant to leave and unsure where to go or what to do – especially in the winter season.

Mrs. Lee recorded some war rumors from the Western Theater, mentioning some specific ships. The Confederate Queen of the West had originally been a U.S. side-wheel steamer with the same name, operating in the Yazoo and Mississippi Rivers with the Western Flotilla. The Union ship was captured by Confederates in mid-February due to some mishaps and controversial choices by her Union crew.

The Confederates happily repaired the vessel and add CSS to the name before sending her back to the river conflict where, on February 24, 1863, she forced the USS Indianola to surrender below Vicksburg, Mississippi; the Indianola had three inch armor plate and was one of the finest ironclad river gunboats. However, the CSS Queen of the West would have a short reign and was fated to be destroyed in battle on April 11, 1863.

Mary Greenhow Lee kept an extensive journal during the Civil War years. Her statement in this journal excerpt, “After the war is over, I will publish my account of it,” sheds light on some interesting attitudes of female Southern diary keepers. Some wrote privately. Others wrote specifically for publication or the historical record and knew they were writing history.

With that in mind, it’s important for historians to evaluate the primary sources’ intent. That doesn’t mean disbelieving what the women wrote, but more of a consciousness if they were writing with a specific intent and what intent might have been. Hey, every writer has opinions and an angle that works into their writing, whether it’s a journal, nonfiction book, or fiction narrative.

Another interesting note: no matter what Milroy thought he was accomplishing militarily, Mrs. Lee knew she was winning battles. Not battles on the fields with infantry and artillery, but every purchase she made in defiance of his orders scored her a victory in the civilian vs. military conflict unfolding in Winchester. And each little victory boosted her morale and determination not to give in to his “Yankee orders.” Though the victories were semi-secret in 1863, she wanted to make sure the world knew about these civilian successes. And she would publish the account! Her account. Her story.

Ironically, Mary Greenhow Lee’s journal wasn’t officially published until 2011, but perhaps she would have been pleased that it was painstaking transcribed and prepared by a team of volunteers led by civilian lady in Winchester, Virginia: Eloise C. Strader. Decades later, Ms. Strader helped ensure that this Civil War woman’s voice was heard.

P.S. Interesting primary source on this first Monday of Women’s History Month, huh? What other details are important to remember and consider when studying primary sources written by ladies in the past? 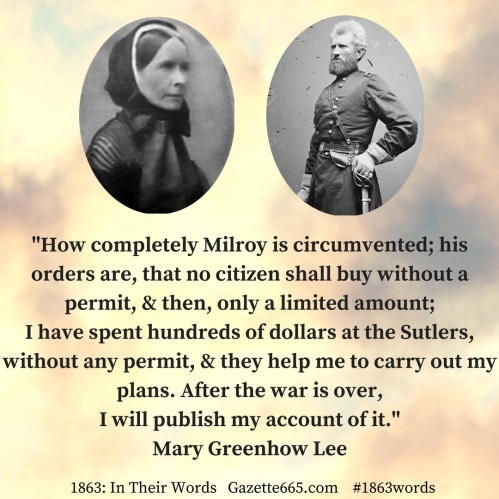