Carpetbaggers and Scalawags. They were creatively unkind names used in the South for certain men in society and politics during the Reconstruction Era. I’d heard the historical terms and was familiar with their general definition, but I decided to delve into the connotation and history of these names and see if these men where really the villains, heroes in disguise, suspicious characters, or something else entirely.

This has been quite a research project today (yep, I didn’t pre-write this blog post – hence the late posting time). Earlier in the week, I planned to write about the effects of Reconstruction on the Civil War’s Border States; however, as I dug into the history of the topic – requested by a blog reader – I realized that to do it full justice, I needed some more research time and a particular resource that isn’t readily available. So – being flexible – I changed topics in the middle of the process, and decided to explore the details of these names so closely associated with the Reconstruction Era.

Please note: the terms “Carpetbagger” and “Scalawag” are used to explain and define since these terms are typically used in history books. In this blog post, they are not meant in the disrespectful, insensitive way; I decided to keep the historical terms to avoid confusion and since these labels are often used in general discussion of this period of history.

Harper’s Weekly cartoon of a Carpetbagger ( published in the U.S. before 1923 and public domain in the U.S.)

A general term – usually derogatory in the historical setting – used to describe Northerners who came to the South after the Civil War and took an active role in politics, supporting a Republican Reconstruction agenda. The name came from the traditional, white Southerners perspective that these men were the lowest classes of Northern society, carrying all their goods in a carpetbag and eager to take advantage of the region’s misfortunes. As the product’s name suggests, carpetbags were large, carry-all bags typically used for traveling.

In reality, Carpetbaggers tended to be well-educated, middle-class men who were pillars in Northern communities. Many had served in the Union army during the war; others were teachers or Freedmen’s Bureau agents, specifically desiring to help the freedmen in the political scene.

Why did Northerners get involved in Southern politics during the Reconstruction Era? Ultimately, they were part of a movement believing Southern Republicanism (political party based) needed white support. Many arrived in the section prior to 1867, which was before African American votes were guaranteed by the Constitutional Amendment. Additionally the 14th Amendment prohibited some of the former Confederates from government position, creating a power vacuum. 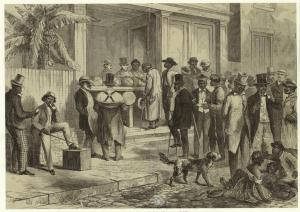 Registering black voters and encouraging them to vote a certain way was part of the Carpetbagger goal to create a Pro-Republican and socially progressive South.

Individually, Carpetbaggers’ motivations varied. Some looked for quick political influence, position, and profit. Others had tried and failed at cotton planting, needed money, and thought politics would be the golden ticket. Some were idealists. Others selfishly sought personal gain or believed they were entrusted with the task of reforming the “un-progressive” South.

Many Carpetbaggers actively worked in Florida, South Carolina, and Louisiana. Though in every former Confederate state the actually Carpetbagger population was only 2% of the entire population, they were accused of “taking over the government.”

Unfortunately, though some Carpetbaggers had sincerely good intentions, many took advantage of voter illiteracy, favored segregation, and were accused of purposely supporting measures to create problems between Southern blacks and whites. By the end of the Reconstruction Era, the majority of Carpetbaggers packed their belongings and returned North, many still looking for financial and political success.

A historical derogatory term used to identify Southerners who supported the Republican Party and peaceful reunion of the nation. “Traditional” Southerners often viewed Scalawags as “traitors” to the South, despite their backgrounds which often included Confederate service.

They had a variety of motives, intentions, and past histories. Many had served in the Confederate military, but weren’t barred from political service during the Reconstruction Era. Others had been pro-Union men in the South. Others simply sought a way to heal the region or “progress” the section into a better economic base and more liberal society.

With many Scalawags having former political experience, they tended to be powerful and somewhat influential for a time in Southern politics. Their individual motivations varied, but they were consistently anti-Democrat (political party) and were or leaned Pro-Republican on Reconstruction policies and protection of rights for freedmen. There were far more Scalawags than Carpetbaggers, partly because Scalawags didn’t have to “move South.”

They often worked to “harness a revolution”, working to keep the freedmen’s new rights and keep Southern whites in government. Though not often believing in racial social equality, they valued freedmen’s new role in government and society to a much larger extent than other Southerners.

Powerful for a few years, the Scalawags were eventually forced out of Southern government as white supremacy organized as the Klu Klux Klan and other midnight rider terrorist groups.

Carpetbaggers and Scalawags – with all their self-seeking faults or sincere motives – managed to institute a pro-Republican base of voters among the freedmen and often the poorer whites who were anxious and pleased to see a change in Southern government. Though their political motives usually fit into the larger Congressional plan for Reconstruction, they managed protect and sometimes expand the rights of freedmen in the South. 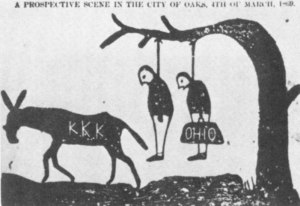 Unfortunately, scandal, factionism, and out-right corruption plagued these state and local governments. Attacked in their infrastructure, beaten, intimidated, and lynched, they lost control as voters feared and leadership was threatened by violent organizations.

Ultimately, despite all their political maneuvers, promises, and efforts, the so-called Carpetbaggers and Scalawags failed to create a lasting Republican party presence in the South that lasted beyond the 1870’s, leaving the region with increasing racist and segregation troubles that would last for decades.

In my opinion the Scalawags probably had the best chance for success since they were from the Southern region and had a better understanding of the intricacies of the politics. However, that very reason created their problem. Other Southerners – many embittered over the outcome of the way and against the freedmen’s right – saw them as regional and political traitors. There are a lot issues in this history – many beyond the scope of this one post.

The Carpetbaggers. I think some of them had good intentions while others just tried to take advantage of a situation. They added to the already-high political tension since they were seen as “outsiders.” Should they have gone South at all? Well, it matched the Congressional steps for Reconstruction and was definitely designed with political and voter registration intentions. Would anyone else have stood up for freedmen’s rights? (The Scalawags actually were.) Did the Carpetbaggers do more harm than good? Could the Scalawags have managed without them? The question remains unanswered in my mind at this point.

Conflicts of interest and corruption plagued the pro-Republican state and local governments and the shaky situation unfortunately created a lack of power and exploitable problems as racism unfortunately regained hold of Southern politics at the beginning of the 1870’s.

One thought on “Carpetbaggers & Scalawags: History Behind The Names”