I received your letter to night and was glad to hear from you and to hear that you are all well. I am tuff and harty as a buck. I have not hearn from the boys for a long time. I wrote to them some time ago but have not got one yet, but I am looking for one every night. I wish that the boyes was here with me for we are in a better place than they are.

I got a letter from Smith Small Thursday night. He is in the hospitel at Fredrick City in Mariland. He told me not to write to him for he was going away from theair and he wants some of you to write to him. I got your letter that had the order and the stamps in, but it has not dun me any good yet for we have not ben paid off yet, but I think they will pay us before long. Uncle Sam owes us five months pay and if they don’t pay us until May they owe us six months pay.

We are yet to work on the fort and today we had nice time fireing bum shels at a target. We have got an old minister here and we have to go and hear him preach every Sunday afternoon. I wish I was at home tomorrow morning so to have a dish of bread and milk or a little worm [warm] bread and butter. Milk is worth five cents a pint out here and butter is worth thirty-five cents a pound.

You tell Owen that this no place for little boyes and he had better stay at home if he knoes [knows] when he is well off. Tell the old man [his father] not to work too hard this summer. George Dodg went home on a furlow Thursday and I suppose he is home by this time. He will stop ten days.

I don’t know of any thing more to write this time so I must bring my letter to a close. Write often as you can.

He was twenty when he enlisted in the 18th Maine Volunteers in 1862, leaving an alcoholic father, struggling mother, and eight siblings. He had spent youthful years working for his father on the farm and was big and strong. During his time in the army, Bradford wrote to his mother frequently, his sister and father occasionally, and his sweetheart regularly once things were “all settled” between them. (The letters have been collected and published in a titled volume No Place For Little Boys, edited by Melissa MacCrae and Maureen Bradford, 1997.)

In January 1863, the 18th Maine Volunteers transformed to the 1st Maine Heavy Artillery and this unit spent all of 1863 and the first few months of 1864 in the relative safety of the Washington Defenses, having occasional artillery practice and building forts and leaving Bradford with hard work, spare time, and no battlefield experience.

That changed in 1864, though. With just months left in his enlistment, Bradford and the 1st Maine Heavy Artillery marched into the Overland Campaign. The unit suffered some of the heaviest casualties of any regiment in the Union Army of the Potomac. Bradford survived his first skirmish with only a bullet’s “scratch but on June 7, 1864 received a serious wound his right knee. Surgeons amputated his leg and sent to a hospital. Bradford recovered, eventually returned home, married his sweetheart, and became a successful and respected member of his community. He was one of the fortunate ones in his regiment.

Almost every letter Bradford wrote to his mother included financial details, advice, or requests for limited funds. He sent her his pay. Reading through the letter collection, there are suggestions that Bradford’s mother was in a difficult situation caused by her husband’s struggles with alcohol and her sons in the army. Even though that provided an income, it wasn’t regular and the boys weren’t there to help on the farm.

In 1863, Union privates made $13 per month. But that didn’t mean they got paid every month. Nowadays, we’re used to regular paychecks or at least contracts which let us anticipate when we’ll get paid, much easier than the Union soldier (or his mother) who was waiting for late pay.

Some of Bradford’s brothers had enlisted in a different unit, and as the oldest brother, he tried to keep track of them and worried because their unit seemed to be in more danger. Thoughts of family, friends on furlough, and other home memories crowd into this relatively simple, straightforward letter.

I do find Bradford’s “train of thought” interesting, assuming he was writing in the order that subjects came to mind, which seems typical in his letters. He writes about a minister, which might have prompted thoughts of church which may have led to thoughts of home because the next thing he wishes – to be home, eating fresh bread and drinking milk. The simple things make the home the best in any era, I suppose. 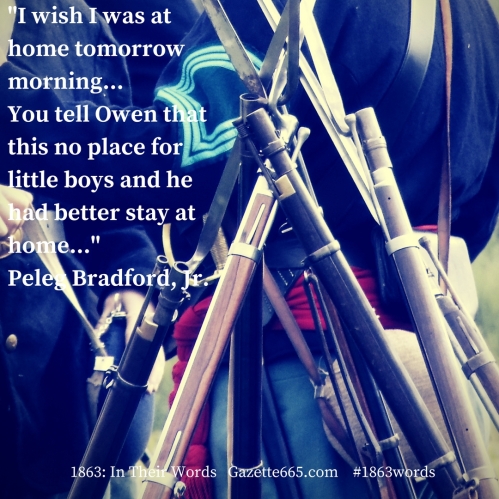