The enemy has made a stand at Chancellor’s, which is about two miles from Chancellorsville. I hope, so soon as practicable, to attack.

I trust that an ever kind Providence will bless us with success.

P.S. The leading division is up, and the next two appear to be well closed. T.J.J.

“Fighting Joe” Hooker opened the spring campaign for the Union Army of the Potomac, taking his troops across the Rappahannock River and into the Wilderness on April 30, 1863. On May 1st, Confederate soldiers opposed the Union advance; surprisingly, Hooker seemed to lose confidence and rather than driving back his foes, he gathered his army and waited in the Wilderness area near the Chancellorsville Cross Roads.

Confederate generals Lee and Jackson devised a plan to divide the Army of Northern Virginia and strike a flanking blow. May 2 – Jackson moved his entire corps through the dense Wilderness on a local road, eventually filing the soldiers into position, poised on the Union army’s left flank. At this point, Jackson sent the dispatch to Lee; a little later, Jackson launched the attack which swept Union troops back toward their center lines in confusion. Darkness and disorderly attack lines slowed the Confederate pursuit, and that night Jackson was wounded by friendly fire (see next section). On May 3, the Confederate pressed their attacks, driving the Union troops back to a new defensive position which they held for two days before retreating back across the Rappahannock River.

The Battle of Chancellorsville is often considered one of Lee’s finest victories, combining risk, daring, attack, and challenging maneuvers to score yet another Southern battlefield victory.

End of a Battlefield Legend

In the darkness on the night of May 2, 1863, General Thomas J. Jackson – better known by his sobriquet “Stonewall” – worried about his attack. Nightfall came too early for him and his battle plans and left his lines in disarray with Union troops starting to rally against his advance. Trying to gather information, Jackson and his staff rode beyond Confederate lines into a kind of silent no-man’s land; when they tried to return, vigilant North Carolinian soldiers thought the group of horsemen were Union cavalry and opened fire. Staff officers and General Jackson took bullets.

Wounded in the right hand and severely in the left arm, Jackson’s men evacuated their commander from the field during an artillery barrage, eventually placing him in an ambulance and taking him to Dr. Hunter McGuire. Later that night, McGuire and other surgeons amputated Jackson’s left arm and later moved him to a safer location near Guinea Station – away from the continued battle.

For several days, it seemed like the general’s wounds healed and he would recover. Then pneumonia symptoms appeared. Jackson succombed to the illness during the afternoon of May 10, 1863. “Stonewall” – legend of the Confederacy and Lee’s go-get’em corps commander – was dead.

Notice Jackson didn’t sign this Chancellorsville dispatch with his nickname. In fact, he didn’t sign anything as “Stonewall.” During his life and even from his field hospital bed, he insisted that name belonged to the First Virginia Brigade, not to him.

Looking at how he signed his name and considering the name people recognize today illustrates the difference between Jackson as the man and Jackson as the legend. Jackson was famous before his death, but his demise in the middle of war allowed the South to create a kind of legendary mysticism and martyrdom from his battlefield victories, personality quirks, and rather ordinary life. Jackson’s image – if you will – transformed into something quite different from the real historical character, and I think the popularity and influence would have shocked and likely disappointed this humble man who devoted insisted all victories, failures, and defeats were ordered by “an ever kind Providence.” 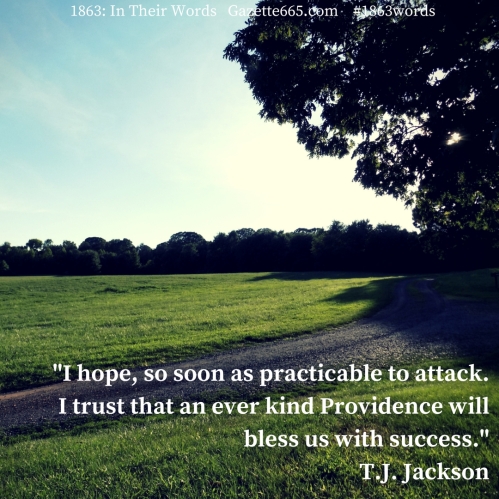