Now I have command of the Division lately commanded by General Devens. It was the first to break on May 2nd and is in a most disgusting condition as to discipline and morale. But if hard knocks and a tight rein will make them fight they will have to do it. One of the Brigades is wholly German and is commanded by Colonel von Gilsa (or rather is now commanded by a Major as Colonel Gilsa is away and I have the next Colonel in rank in arrest). I expect to have to arrest them all the way down until I find some private soldier who will make them do things properly…

I have just come in command and am working hard.

During the decades prior to the Civil War, many immigrants came to the United States from the German states. Particularly around 1848, many sought refugee and safety in America after revolutionary efforts in Europe failed. They brought a lot of energy, new philosophies, and big ideas to their new homeland – qualities that weren’t always welcomed.

The Civil War offered an opportunity for recently immigrants to make a statement of patriotism and devotion to their new country through military service and battlefield prowess. Germans, Irish, and others took the opportunity – many hoping to reverse prejudices and stereotypes through their service and sacrifice.

Many German-Americans served in the Union armies. In the Union’s XI Corps (Army of the Potomac), there were many units. Unfortunately, this corps had broken at the Battle of Chancellorsville when the Confederate flank attack hit their lines in a surprise assault; since there were so many German-Americans in that corps, an increasing wave of prejudice against these soldiers and units swept through the army and the country. 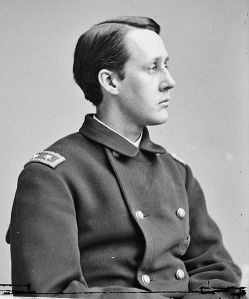 Francis C. Barlow (in this photograph he is a major general)

General Francis C. Barlow returned to the army in the spring of 1863, after recovering from a serious wounding from the Battle of Antietam. He was assigned to command a division in the ill-fated XI Corps.

Barlow is an interesting character. Accounts suggest he wanted to command some of the newly formed regiments of black soldiers, but he had strong prejudice against the German-Americans in his 1863 command. Also, it didn’t help that Barlow was a strict disciplinarian, who had no patience for cowardice. With reputation, reports, and prejudice against these soldiers, Barlow had a lot to complain about. Unsurprisingly, he wasn’t a beloved division commander with these troops.

For better or worse, Barlow would lead his division at Gettysburg, and they would be involved in another serious and semi-disorganized retreat on the first day of that battle. Perhaps luckily for the troops, Barlow got wounded and didn’t return to the XI Corps in 1864.

Barlow was arresting soldiers for disciplinary issues, but his note about a major commanding a regiment instead of a colonel brings up an often overlooked fact of Civil War units.

We can understand and be familiar with the number of soldiers in various sizes of units and which ranking officer commands which type of unit. That tends to be the ideal and what it should be on paper. During the actual war – particularly by 1863 – most regiments were not full strength and many didn’t have “properly ranked” officers. When an officer was killed, wounded, prisoner, or sick (or in Barlow’s division, under arrest), someone else had to command and it could be an individual of significantly lower rank depending on the circumstances.

It’s a reminder that just because the outlines says a regiment should be 1,000 men commanded by a colonel that doesn’t mean that’s the way the regiment will really be on the campaign or battlefield. 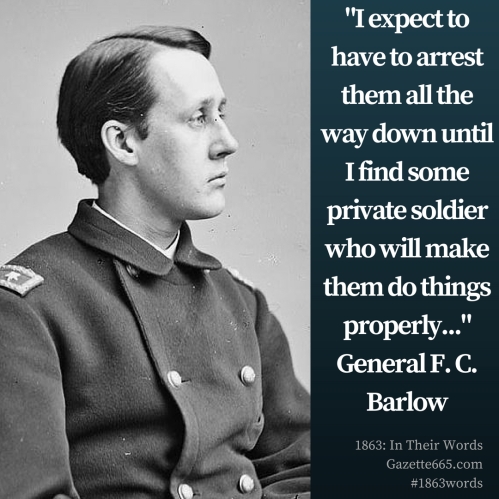