We are still tunneling away at the rebel works around the city and in the same position as we were when I last wrote to you, with a fair prospect of remaining so for several days to come, but we will go into the city of Vicksburgh after awhile, that is shure, for we can live outside of their works longer than they can inside of them, that is certain, for we can get everything we want, and they can get nothing atall. We hear all kinds of rumors of how they are suffering fro want of water and provision, but we can’t tell which tale is the true one, and so we let them pass for what they will fitch.

The only thing we have here that we can rely on for certain is the roar of cannon and the rattle of musketry, but we have been taking it perfectly cook and easely since the day of the charge. If you were here some time you would not think that we were face to face with an enemy, the men whistling and singing, sutlers selling their wares, and everything looks as if we were in camp for a big rest instead of besieging a rebell city.

The worst thing here is the water does not agree with the men. A good many of them are complaining with the diareah. Jacob Shut, Emanuel Sawers, and Levi Snyder are here in our hospt. They are trying to get Shut and Sawer furloughs for twenty days, but I don’t know how they will succeed…

The weather for the last three days has been most intolerably hot. It looks a litle like rain to day…

I am not verey well and don’t expect to be untill I get away from this watter. I have written this makes seven letters since I have one from any person, but I reckon the next mail will be full of them. I hoope that we will be in Vicksburgh before I have to write again. Give my love to all. Tell them I eat as many ripe blackberreys as I wanted on day before yesterday. Write soon.

From your Afect Husband

Sergeant William Winters of the 67th Indiana Infantry had been in the army less than a year, enlisting in August 1862. By the early summer of 1863, his unit was in the Union XIII Corps which was commanded by General McClernand.

Contemporary illustration of the Siege of Vicksburg. Note Grant on the right with the field glasses.

After Union victories at Chamption Hill and Big Black River Bridge in mid-May, Confederate forces retreated into the city of Vicksburg. Union General Grant launched assaults against the city’s fortifications on May 19th and 22nd, but when the attacks failed, the siege operations began. Union troops settled into their positions and waited, knowing that Vicksburg’s food supply would run out.

Winters notes how typical camp-like scenes became common for those not on the firing line. However, the Vicksburg siege lines weren’t particularly good “camping grounds” as he goes on to explain.

Spoiler alert! The Siege of Vicksburg will end on the Fourth of July 1863. More details coming up in a few weeks…

Disease took its toll in the besieged city and among the Union troops waiting outside. Winters mentioned some specific ailments and mentioned he hasn’t been well. For some soldiers, debilitating illness was a ticket to a hospital or home until they recovered. Others couldn’t get sick leave and suffered in camp. The men mentioned by name in the letter where probably from Winter’s hometown or at least known to the family.

After the rather depressing details of bad water and ill health, Winters did manage to end his letter on a more cheerful note. He had been picking and eating blackberries!

I love how he chose to include this details in his closing. Perhaps he was thinking of going to get a snack. Perhaps he’d been eating berries while writing. Perhaps he realized it was something his family would relate to. They probably had berry bushes in Indiana and it was a relatable link.

His family might not have understood the details or implications of the siege. They might have worried about the illnesses. But they could smile when they heard he was berry picking and at least getting enough to eat. 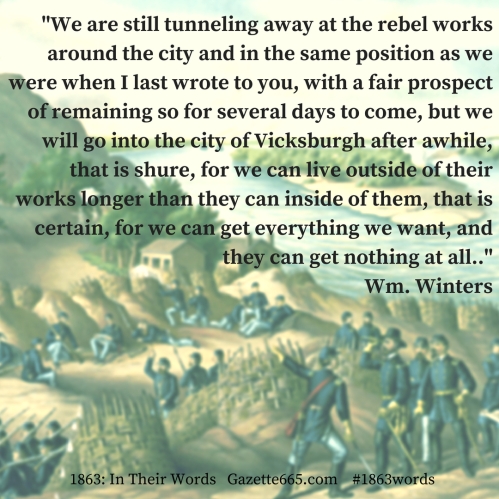