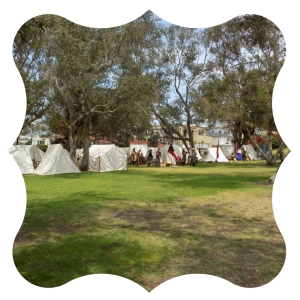 If this was a real tea, we’d be sitting on the bluffs overlooking the ocean and old artillery battlements at Old Fort MacArthur since I’m at a living history event. It’s blazing hot so ice tea is the drink of choice and no cookies – because I’ve been eating healthy these last couple weeks. Want a carrot?

Since I’m surrounded by military living history encampments, let’s talk some military history. This week (July 1-3, to be exact) marked the 155th Anniversary of the Battle of Gettysburg – sound like a good topic? Let’s get this conversation started…

Emerging Civil War: in your opinion, which general – Union or Confederate – made the most difference during the Battle of Gettysburg? Why?

Oh, you’re actually going to make me answer that question of the week from ECW? Okay, okay…

This is so hard because I have respect for a lot of generals at Gettysburg. Let’s see if I can narrow it down to three.

Winfield S. Hancock – commander of the Union II Corps and basically a leadership/followership genius at Gettysburg.

Oliver O. Howard – commander of the Union XI Corps, helped reestablish defensive lines at Cemetery Hill after the Union retreat on Day One, took an active role in rallying the Union boys in a scene which should be immortalized in artwork!

George S. Greene – played a vital role in the Union right flank defense at Culp’s Hill (which is one of my favorite battlefield locations to study)

Sorry – I don’t have any particular favorite Confederate generals at Gettysburg at this time. Dr. Hunter McGuire – Confederate Medical Director, Second Corps – did some pretty amazing, life-saving work, though.

Who are your favorites and why?

Any favorite regiments at Gettysburg?

I’m partial to the 10th Virginia and 27th Indiana because I researched those units quite a bit while working on Blue, Gray & Crimson.

This year I “spent some time” with the 1st Virginia Regiment (Pickett’s Charge) and 61st New York Regiment (Wheat Field) while reading journals by some of those units’ lieutenants. Interesting and scary stuff…

Do you have a favorite regiment at Gettysburg?

Do you have a favorite Gettysburg Civilian?

Gettysburg Civilians were so incredibly brave and resilient. It’s unfair to have just one favorite. Tillie Pierce‘s book made me completely revise my thinking about Gettysburg civilians when I was still a kid. Sarah Broadhead‘s journal is one of my all-time favorite primary sources because it was written in “real-time” and just reads with tragic bravery. Dan Skelly was a young civilian man who left some interesting and readable primary sources about the battle.

After adding up the facts I’ve currently unearthed, I’ve got this feeling that Jane Smith’s journal might hold some answers to military/medical research I’ve been tracking for some time. So she might be my favorite Gettysburg civilian this year if her writing holds the details I’m looking for! Stay tuned…

Who’s your favorite Gettysburg civilian? Got questions about a few of them? I’d be happy to dig up some answers!

Let’s chat in the comments, but right now I’m off to see the gladiator games! Watch for photos on Facebook from this living history event…

2 thoughts on “Tea With Sarah: Let’s Talk About Gettysburg…”