Continuing with our short study on influential Founding Fathers and their descendants who fought at Gettysburg… Today, we’ll take a look at some Virginians – one who helped found the United States and one who fought for secession and the Confederacy decades later.

Lawyer Edmund Pendleton (b. September 9, 1721) played an influential role in Colonial Virginia politics and lawmaking. He served in the House of Burgesses, representing Caroline County. Unhappy about taxation without representation, Pendleton became involved in revolutionary politics, serving on the Committee of Correspondence and representing Virginia in the Continental Congress.

Elected the first speaker of Virginia’s House of Delegates (state government), Pendleton, Jefferson, and Wythe worked to revise the state’s law codes. From 1778 until his death, he served as chief justice of Virginia’s court of appeals. When the U.S. Constitution reached the ratification stage, Pendleton presided over the ratification committed, argued against Patrick Henry, and favored adopting the document to create a unified country. (Virginia did eventually ratify the Constitution).

Though married twice, Edmund Pendleton did not have any surviving children and when he died on October 23, 1803, his grandnephew, who was his adopted son, inherited much of his property. This “adopted son” – Edmund Pendleton, Jr. – had a son, William Nelson Pendleton, and his son was Alexander S. Pendleton. 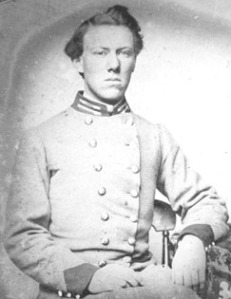 Though not a direct descendant (see above), Alexander S. Pendleton was Edmund Pendleton’s great-grandson by adoption and inheritance. Born September 28, 1840, Alexander – called “Sandie” by family and friends – grew up as the youngest child and only son in the William Nelson Pendleton Family. Highly educated, he went to college at a young age – eventually leaving school in 1861 to join Confederate forces.

After serving with an artillery unit for a few weeks, Pendleton transferred to staff of the First Virginia Brigade, working for General “Stonewall” Jackson. By 1862, he was assistant adjutant general and basically operating as chief of staff throughout the Valley Campaign, Seven Days Battles, the Antietam Campaign, and Fredericksburg. When Jackson died in May 1863 and Richard Ewell took over the Confederate Second Corps, Sandie promoted officially to chief of staff and served in that position under Ewell and later Jubal Early.

Pendleton was mortally wounded at the Battle of Fisher’s Hill in September 1864 and died of his injuries on September 23, 1864 at age twenty-three.

The evolution of the Confederate Second Corps took time. When it was finally officially established, General Jackson commanded it. After Stonewall’s death, General Lee reshuffled the army, creating three corps, and gave Second Corps command to Richard Ewell. In 1864, Jubal Early commanded the corps in the defense of the Shenandoah Valley.

Generally speaking, the headquarters of this Confederate command operated smoothly and efficiently. With a sober reputation, the officers at this command center were talented and skilled men who know how to get the job accomplished and weren’t particularly interested to see their names in the newspapers.

On The Fields Of Gettysburg

The Confederate Second Corps smashed down from the north, eventually breaking Union lines north of town on the July 1, 1863. Driving the Union men through town, this corps occupied the village and spread out to the north of Cemetery Hill and Culp’s Hill. Ewell, concerned that his men were disorganized and weary, declined to attack the new Union position or occupy Culp’s Hill.

For the second and third days of the battle, Second Corps divisions and brigades attacked East Cemetery Hill, Culp’s Hill, and skirmished in town and along the lines. Their attacks failed to gain and hold ground on either hill.

For Pendleton, Gettysburg proved the loss of General Jackson. Though loyal to the new commander, he was frustrated about General Ewell’s lack of initiative and attack on July 1st, expressing to a fellow staff officer: “Oh for the presence and inspiration of Old Jack just for one hour,” as Ewell dithered about decisions.

On July 2nd, as Confederate attacks at failed and troops retreated, Pendleton panicked. In the twilight, he believed the moving troops were Yankees, about to capture Second Corps artillery batteries, and galloped off to order the big guns to the rear. Fortunately, another staff officer noticed Pendleton’s confusion, stopped him, and confirmed that the battery was really safe and no Union troops approached. According to other officers and friends, the incident at dusk at Gettysburg was the only time Pendleton reacted without full information on a battlefield and nearly caused a disaster.

In one of history’s strange juxtapositions Sandie Pendleton fought against the ideal of Union his adopted ancestor had argued to instill. Both ancestor and “descendant” were Virginians, but the different eras of their lives, different political conflicts, and different conclusions led them on different paths in in American History.

One thought on “At Gettysburg: Edmund Pendleton’s Great-Grandson”