Another two chapters in our history read-along this summer! This section focuses exclusively on World War II in the Pacific, so if you’ve been waiting for that – we’ve arrived.

Looking for some World War II books to read with kids? (since this read-along book isn’t suitable for kiddos) Check out our resource lists on the WWII history page! May we recommend Pearl Harbor is Burning! A Story of World War II Kathleen V. Kudlinski?

Here are the notes from Chapters 9-10 in Inferno…

Japanese troops during the Malaya campaign

Quote of the chapter: “On the day the sun shines with the moon – The arrow leave the bow – It carries my spirit toward the enemy – With me are a hundred million souls – My people of the East – On this day when the moon shines – And the sun also shines.” Poetry by Japanese General Tomoyuki Yamashita before landing in Malaya. (page 205) 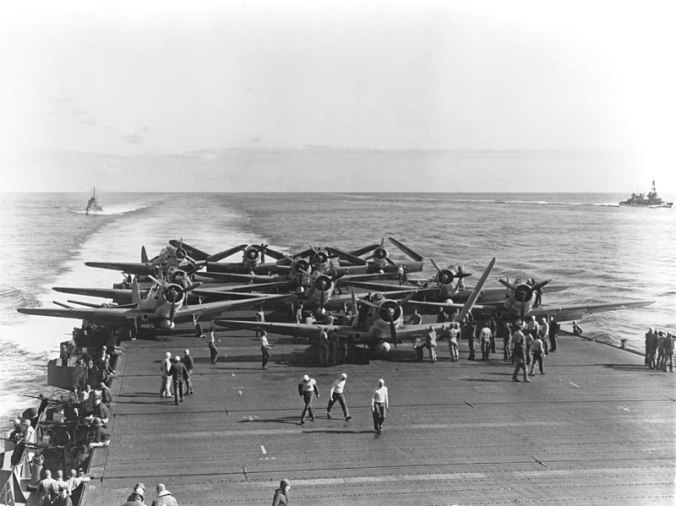 Planes prepare for take off aboard the USS Enterprise during the Battle of Midway.

Quote of the chapter: “The news commentators had us all winning the war. It made us very sore. We were out here where we could see the victories. There were plenty of them. They were all Japanese. Yet if even at one point we are able to check an attack, the silly headlines chatter of a ‘victory.'” Lt. Robert Kelly, early 1942 before the decisive victories. (page 231)

I was familiar with the fight for the Philippines and the “turning point” battles at seas, but I honestly didn’t know much about the disintegration of the British Empire in Southeast Asia during World War II. I found these details very interesting and also saddening – how imperialism and racism was often the reflected in the quick abandonment of colonial territories.

In Chapter 10, the details about Australian and American military relations was particularly interesting as they helped and hindered each other during the Pacific campaigns.

What facts or quotes really stood out to you? I’d love to hear about your interesting findings in the comments!