10 Things To Know About Charles Lindbergh 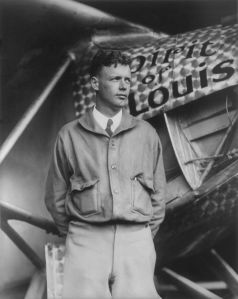 One of the most famous aviation pioneers in American history is Charles Lindbergh. Just twenty-four years after the Wright Brothers made the first successful powered flight in history, Lindbergh made a solo flight across the Atlantic from New York to Paris.

Here are the top ten things you should know about Charles Lindbergh, his flights, and his life…

Charles Lindbergh was born in 1902 in Detroit, Michigan, and spent most of his early childhood in Minnesota and Washington D.C. After his parents separated, young Charles moved back and forth across the country, attending various school. He attended College of Engineering at the University of Wisconsin for about a year and a half before dropping classes to attend flight school.

2. He had various jobs and roles in the early aviation.

On April 9, 1922, Charles flew for the first time at Nebraska Aircraft Corporation flight school. He could not afford to solo since he couldn’t pay the required damage bond. About six months after leaving flight school, Charles showed up in Georgia and bought a old Army airplane for $500; he hadn’t flown in six months, but took off and after just five hours of “pilot in command” air time, he headed out for barnstorming and other stunts to impress crowds.

In 1924 he joined the U.S. Army Air Corps but a year later he returned to civilian life since military pilots weren’t needed at the time. He worked as a flight instructor and then found the U.S. Air Mail Service.

By 1926, Charles had been flying the air mail and had been forced to bail out twice due to bad weather. He was looking for the next grand adventure.

Two pilots had flown across the Atlantic eight years prior to Charles Lindbergh’s feat. The Orteig Prize offered $25,000 for the first pilot to make the the flight again within five years of the prize’s announcement.

Charles persuaded businessmen from St. Louis to help finance a plane for the venture. A aircraft company in San Diego eventually built the plane which was named “The Spirit of St. Louis.”

On the morning of May 20, 1927, Charles Lindbergh took off from Roosevelt Field near New York City with 450 gallons of fuel. His careful calculations, the ever changing weather, and personal stamina were tested in the next 33 1/2 hours. On May 21, 1927, he landed in Paris, welcomed by a huge crowd which caused the largest traffic jam in history up to that point.

4. He received a Medal of Honor for his aviation milestone.

Charles’s aviation accomplish launched him to instant fame. Newspapers around the world blasted the historic milestone. Interviews, numerous awards, banquets, speeches, honorary flights, and other commemorations were in his future for the rest of his life.

On December 14, 1927, Congress awarded Charles Lindbergh with the Medal of Honor and President Coolidge presented it to him the following year. He was also promoted to  colonel in the reserve of the U.S. Army Air Corps.

He also wrote, autographed, and toured the world, meeting with leaders and other aviation pioneers.

5. His son was kidnapped in a highly publicized case.

Charles Lindbergh married Anne Marrow in 1929 and the couple had six children. Charles was a strict father, rather disconnected from his children due to his fame and traveling.

In 1932 one of the Lindbergh’s toddler sons were kidnapped in an incident that became the “Crime of the Century.” Eventually the child was found murdered and the convicted criminal was executed, but the ordeal brought the Lindbergh name back to the newspapers in an uncomfortable publicity during a tragic affair.

6. He initially did not support World War II.

Charles Lindbergh had visited Germany as the Nazis took over during one of his tours. He had seen their new war planes and also studied the aviation advances of the Soviet Union. As the global conflict heated up, Charles advocated for peace and American non-invention or neutrality and eventually becoming so outspoken that President Roosevelt asked him to desist.

However, after the attack on Pearl Harbor, Charles recanted – at least publicly – and flew missions in the Pacific as a civilian spotter and observer. The Army Air Corps refused to restore his colonel rank after the earlier comments.

7. He was an inventor and inquisitive mind.

Following his aviation fame, Charles took interest in Robert H. Goddard’s rocket science ventures and helped him get funding to pursue the study.

After a family member suffered from a heart condition, he started studying internal organs and wondering about transplant surgeons. He wrote a book about the possibility of an artificial heart and even invented a specialized pump that would eventually be recognized as the forerunner of a heart-lung machine.

Unfortunately, Charles was not a family-man and in his later life, he was unfaithful to his wife. Several children who did not have his last name were born in Europe.

More positively in his later life, Charles Lindbergh supported conservation efforts, advocating for perserves and animal protection in Hawaii where he lived his final years. He helped found Haleakala National Park and actively shared his belief that mankind’s adventures and advancements must benefit humans and remain non-invasive to nature.

Charles Lindbergh died in Hawaii and is buried on the island of Maui. His epitaph includes a verse from Psalm 139:9 “… If I take the wings of the morning, and dwell in the uttermost parts of the sea.”

This aviation pioneer made his most memorable flight early in his life, gaining fame and influence. He used his position to advance various causes – some helpful, others more questionable. However, he had proved that air travel would be possible and air delivery was a feasible methods for the mail service. Bridging the Atlantic in the sky with his solo flight, he pushed the limits for the aviation communities and made the world seem a little smaller.