From a startling moment in the “abandoned building” to beginning a faster journey west, this week’s chapter selection in Rick Barry’s Gunner’s Run offers new plot twists and possibilities. Also, there’s plenty to discuss to add a little extra history to the discussion.

There are a few spoilers in this blog post, so read with care!

Most cultures have their share of scary stories. Germany is no exception. The country’s legends and folklore has charming stories and truly frightful tales. Interesting, some of the grotesque stories were emphasized into the Nazi culture and popularized music for a “nationalist spirit.” Some of the dark, semi-secret ceremonies for induction into the elite Nazi party leadership or military units played upon themes and late night scenes from scary stories coming from Germany’s past.

That certainly doesn’t seem to cross Jim’s mind when he frightens the boys. But who knows what stories they had heard of vampires, of heroes come back to life, or of spirits returning to haunt the living. The situation was startling enough, but if those boys had know folkloric stories, it may have contributed to their fright and hasty exit from the scene.

Blackout procedures were used by civilian populations and the military during World War II in an effort to reduce visible targets for aerial bombing and help control the civilian responses to the bombings. All light was supposed to be covered or turned off. Civilians and some military personnel were encouraged to take refuge in air raid shelters when the warning sirens went off. Despite the blackouts, both Allied and Axis bombers had navigational equipment and landmarks to help them find their targets and night missions were regularly flown.

Blackout was practiced in nations in the theaters of war and in removed countries. For example, the United States implemented blackout procedures, especially in the coastal states to avoid presenting targets for submarines or planes from aircraft carriers.

Part of the Allied bombing campaigns in the European Theater during World War II included attacks on railroad centers or even moving trains in an effort to hinder and cripple the Axis’ transportation and supply system. The precision bombing plans touted by the Allied commanders were not quite as precise as the propaganda suggested and many bombs fell on civilian homes or centers near the targets. Still, in most bombing raids, the objectives were military, supply, or transportation hubs with strategic value, rather than random targets.

German aircraft strafed and bombed rail systems and trains as they took over Western and Eastern Europe. As the Allies gained air superiority, the repaired tracks and transportation systems became targets again.

One of the dangers for Allied aircraft attacking moving trains or rail yards was accidentally bombing or strafing cars carrying prisoners (or in Jim’s case – escaped prisoners). Sometimes the POWs were able to signal the aircraft, other times they suffered casualties from the friendly fire.

Jim thinks he’s heading into Belgium, so what was happening in this country during World War II? This short video details the Nazi take-over and a short interview with a civilian survivor.

Gunner’s Run does not use heavy symbolism, but I did notice the use and comparison of two coffin-like symbols in this section. In the abandoned structure, Jim created a hiding place from stones and boards which in Chapter 10 he compares to a coffin or hiding place for Dracula; then he compares his plight in the railroad car to living in a large coffin. Is it coincidence or is the author trying to prove a point? 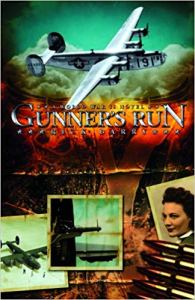 I don’t like to imply too much into an author’s writing. Oftentimes, writers create a straightforward description and story and readers add more through vividly imaginative interpretations.

Still, Jim is concerned about his fate and the comparisons to coffins keep the possibility of danger and death on the reader’s mind without falling into the trap of continually dark themes. Your thoughts?