I shall depict our wants in true but ardent words, hoping to affect you to some action. Here are gathered the sick from the contraband camps in the northern part of Washington. If I were describe this hospital it would not be believed. North of Washington, in an open muddy mire, are gathered all the people who have been made free by the progress of our Army.

Sickness is inevitable, and to meet it these rude hospitals, only rough wooden barracks, are in use – a place where there is so much to be done you need not remain idle. We average here one birth per day, and have no baby clothes except as we wrap them up in an old piece of muslin, that even being scarce. Now the Army is advancing it is no uncommon to see from 40 to 50 arrivals in one day. They go at first to the Camp but many of them being sick from exhaustion soon come to us. They have nothing that any one in the North would call clothing.

I always see them as soon as they arrive, as they come here to be vaccinated; about 25 a day are vaccinated. This hospital is the reservoir for all cripples, diseased, aged, wounded, infirm, from whatsoever cause; all accidents happening to colored people in all employs around Washington are brought here. It is not uncommon for a colored driver to be pounded [beaten] nearly to death by some of the white soldiers. We had a dreadful case of Hernia brought in today.

A woman was brought here with three children by her side; said she had been on the road for some time, a more forlorn, worn out looking creature I never beheld. Her four eldest children are still in Slavery; her husband is dead. When I first saw her she laid on the floor, leaning against a bed, her children crying around her. One child died almost immediately; the other two are still sick. She seemed to need most, food and rest, and those two comforts we gave her, but clothes she still wants. I think the women are more trouble than the men [when asked to donate]. One of the white guards called to me to day and asked me if I got any pay. I told him no. he said he was going to get paid soon, and he would give me 5 dollars. I do not know what was running through his mind as he made no other remark.

I ask for clothing for women and children, both boys and girls…

Excerpts from a letter by Cornelia Hancock to an unnamed friend, November 15, 1863

The Trials of Freedom

For those enslaved persons freed by the advancing Union armies or pursuing freedom by trekking to the Federal lines, liberty offered challenges and trials. The Union soldiers, leaders, and northern civilians were not prepared for the hundreds and thousands of refugees. Then the question arose – who would take care of these freedmen and help them get established in northern (or southern) society?

Ever since General Butler’s announcement that escaped slaves would not be returned to Confederate masters and used the term “contraband” to label these freedmen, the military, government, and civilians had been trying to meet needs; certainly some made more efforts than others.

Sickness, exhaustion, shock, injuries, and other problems plagued the freed men and women, and they had limited options for aid. Unfortunately, much of the north was racist and unwilling to provide assistance. The U.S. Sanitary Commission and private organizations made efforts while the Federal government half-halfheartedly tried, but was really more focused on winning the military war.

She first volunteered as an independent nurse for the army at Gettysburg in the summer of 1863 and spent the rest of the war years in medical service. During the autumn and early winter, Cornelia Hancock worked in a “contraband hospital” located in the outskirts of Washington City.

There, she witnessed firsthand the desperation for freedom of the formerly enslaved. She saw the injuries caused by racists. She saw births and deaths. Miss Hancock reached out to her wealthier friends in the North, telling about the situations and asking for donations to aid the freedmen.

Unlike many of the other women in the north, she did not close her eyes and turn away from the horrors of slavery and difficulties of freedom. She was there, trying to help, comfort, teach, heal, and guide. Though Cornelia Hancock is mostly remembered for her role as a military nurse, some of her strongest moments and most compassionate efforts took place in the contraband hospital.

The human story. My colleagues and I talk about it a lot when we’re discussing researching, writing, and presentation angles. Whether she did it intentionally or not, Cornelia Hancock told the facts and then gave an unforgettable example.

Unfortunately, she did not tell us the woman’s name, but she told us about a mother – seeking freedom and watching her children die. A mother who had left four other enslaved children behind and brought these little ones north to freedom, only to have the agony of watching them die in a so-called hospital. A mother who sobbed on the floor for her children in chains, her deceased husband, and the little ones who might not live to see freedom’s light. A mother who would – somehow – find the courage to go on living, to go on hoping. One day at a time as she tried to make sense of her sorrowful past and look to an uncertain future.

That is an account that will not be easily forgotten. A heroine who must be remembered. 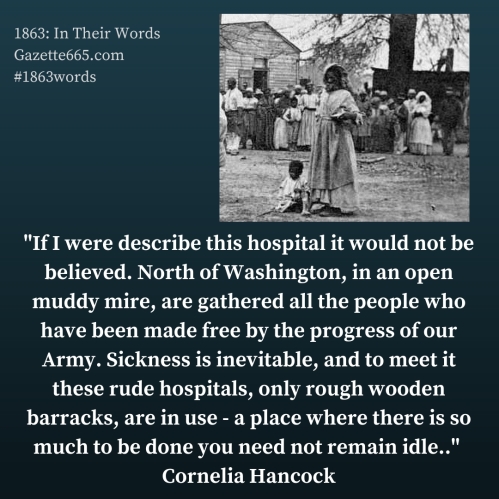