This week cooking has been on my mind. Over at Emerging Civil War’s Blog, I’ve been writing about recipes and cooking practices from the 1860’s and while finishing the dishes in the kitchen on Thursday, I started thinking about the few women who cooked that significant three day feast in 1621.

Today, we’ll discuss the life of Elizabeth Hopkins and her unique story of motherhood and survival in the establishment of New Plymouth…

Did you know that only four adult women survived the first winter in New Plymouth Colony? Significantly outnumbered by the men and children, these women banded together to make homes in the wilderness and care for the many orphaned children.

Think about it. They lived in small, cramped wooden houses with thatched roofs and dirt floors. Their homes were crowded with others beyond their families – if their families had even survived. Food was not plentiful at the beginning of the year. There was no central heating system to warm the house with the push of a button; wood fires had to be kept burning for warmth and cooking. And that’s just a short list of difficulties of the era and place.

Add the dangers and fears of attacks from the native peoples, crying children who couldn’t understand their parents had died, the grief of losing their own loved ones to illness, and loneliness in the new land and a much more complex image of the “Pilgrim” women appears. Very different than the smiling, rosy-cheeked maidens in popular paintings or illustrations of the “First Thanksgiving.” 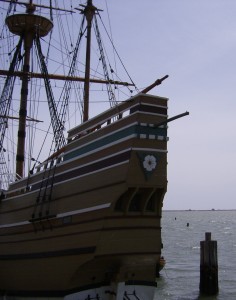 Elizabeth Hopkins was a stranger – meaning, she wasn’t a Separatist leaving Holland or England and searching for religious freedom. The Separatists would have called her a “stranger” and indeed – to some extent – she was. While other passengers on the Mayflower were already well acquainted, Elizabeth and her husband, Stephen Hopkins, might have had some difficulties getting to know their new neighbors.

Master and Mistress Hopkins boarded the Mayflower after Stephen had been carefully recruited by the merchant adventurers of London (who were sponsoring the venture) to help with colony government and administration. Clearly, the merchants weren’t keen on leaving the government to the religious freedom seekers and also wanted someone to look after the financial interests of the venture. Stephen seemed a logical choice for the role; he had been to North America before, shipwrecked in Jamaica and stayed briefly at Jamestown in Virginia.

As the wife of a rather prominent merchant and tanner, Elizabeth Hopkins probably had a pretty good life in England, but she wasn’t staying behind when her husband headed to the new world to become a colony founder! Details about her life in England aren’t much. Most researchers think she was Stephen’s second wife and the stepmother to Giles and Constance Hopkins who also made the journey to America. Damaris who was about one in 1620 seems to have been Elizabeth’s first child.

Motherhood on the Mayflower

When Elizabeth Hopkins left England, she was pregnant. We can only imagine the difficulties she endured in the final months of her pregnancy on the tossing ship, crowded among people she had never met before, chasing after a toddler, caring for stepchildren, and going to a land where no warm house waited for her.

Sometime during the voyage, her baby was born. Named Oceanus, the little one became the youngest passenger to arrive in the New World on the Mayflower. Happily, Oceanus survived his infancy, the voyage, and harsh winter, undoubtedly through his mother’s care.

As mentioned previously, Elizabeth Hopkins was one of four older adult women to survive the winter’s illnesses at Plymouth Colony. Her husband, stepchildren, and little ones also lived. In the spring, the colony leaders – including Stephen – negotiated a treaty with the Wampanoag for mutual protection and defenses. With friendlier relations and ambassadors exchanged, the new colony started to prosper and worked to plant the fields and aim toward the profits desired by the London merchants.

Elizabeth would have been much better acquainted with her neighbors by this time, but she still did not meet all their expectations with religious observances. Still, she must have worked hard and learned to survive in many different ways.

One Day In Autumn…

We don’t know exactly when, but at some point in the autumn of 1621, the men of Plymouth decided to hold a feast and celebrate the successes of that first year. They also decided to invite their Native American neighbors. When the women of Plymouth learned about the plan, they probably did not anticipate approximately ninety Wampanoag arriving to spend several days of feasting and games. 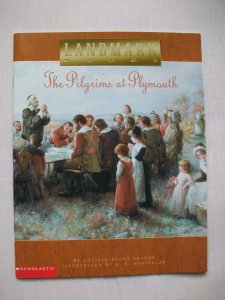 A typical, unauthentic and romanticized image of the “First Thanksgiving.”

While we don’t know exactly what the ladies cooked, we have some pretty good guesses and know that they had a big task for all that food preparation. Undoubtedly, the children helped and the menfolk probably split the wood and helped with other chores. But still – over one hundred people to feed for several days!

After the “First Thanksgiving,” the Hopkins Family stayed in Plymouth and remained influential in the localized, colonial government. Elizabeth died before Stephen, but according to his will, they were buried together. They had seven children, but most did not survive to adulthood.

Beyond A First Glance

The lack of solid details about Elizabeth Hopkins life can be discouraging, but looking closer at the culture and details that we do know reveals a strong woman who dared to cross the ocean in a frail wooden ship. A mother who somehow sheltered and protected her little ones during a winter of terrible hardship. And a woman who worked hard in the new colony and even helped prepare the historic feast that has become legendary.

Sometimes cooking makes the history books and partly because of the legendary feast in 1621, Elizabeth Hopkins is remembered in Early American History.