Harriet Tubman is probably one of the most famous conductors on the Underground Railroad. After escaping slavery herself, she later returned year after year to the South to guide dozens of enslaved to freedom in the North and Canada.

The Harriet Tubman Historical Society has collected and verified a set of quotes by this remarkable woman, and using her words and photographs, we present a short history of her life and achievements. 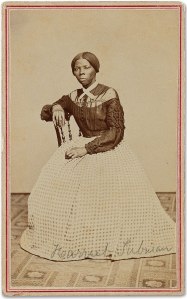 “I grew up like a neglected weed, – ignorant of liberty, having no experience of it. Then I was not happy or contented.”

Born sometime between 1815 and 1825 and called Araminta by her parents, Harriet lived in slavery, tending to her mistress’s child, driving teams, ploughing fields, and dragging logs on Maryland plantations. A terrible accident and head wound broke her skull and for the rest of her life, she suffered unexpected moments of unconsciousness. Harriet had a strong religious faith and interpreted dreams as directions from God, calling her to seek freedom.

“Slavery is the next thing to hell.”

Sometime around 1844, she married John Tubman, a free black man. She also discovered a deception about her parents’ freedom. Their master had promised them freedom when they were forty-five, but their current owners refused to acknowledge the promise. Harriet hired a lawyer to investigate but could not afford further legal fees.

About the time of her marriage, she changed her name from Araminta to Harriet. Reasons for her name change are not quite clear. It might have been part of her escape plans, or it might have been a way to take her mother’s names out of respect and honor.

When the master died, Harriet learned that her family was going to be separated and sold. Faced with this tragedy, she decided to run. At first, her two brothers planned to go with her, but eventually decided to avoid the risk. 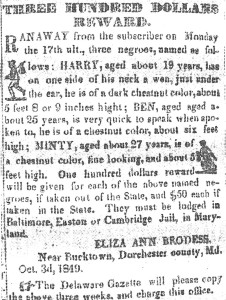 The newspaper notice that Harriet had runaway.

“God’s time is always near.  He set the North Star in the heavens;  He gave me the strength in my limbs;  He meant I should be free.”

In 1849, Harriet set off, alone. She journeyed about ninety miles in her quest for freedom, using the Underground Railroad and her own resourcefulness. According to the laws at that time, she was safe once she reached Pennsylvania.

She settled in Philadelphia, became acquainted with prominent abolitionists, and started working to save money for her next goal.

“I have heard their groans and sighs, and seen their tears, and I would give every drop of blood in my veins to free them”

Drawing strength from religious inspiration and visions, Harriet Tubman began her journeys southward. For years, each spring, she headed secretly into east Maryland to guide a new group of enslaved to freedom. With changing laws, Canada was the only safe place and technically Harriet was engaged in criminal practices according to the slavery laws at that time. Still, she managed to rescue and guide over seventy people – including her family – out of slavery.

Since her identity had to be a secret, Harriet was often called “Moses” – partly since she sang a spiritual song “Go Down, Moses” as her codes that it was time to flee.

“I was the conductor of the Underground Railroad for eight years, and I can say what most conductors can’t say — I never ran my train off the track and I never lost a passenger.”

Harriet Tubman met and worked secretly with a radical abolitionist named John Brown. She did not participate in his violent plan which ended disastrously at Harpers Ferry in 1859 and how involved she actually was in the plotting remains unclear. She certainly inspired John Brown and then believed his death would be useful to the abolitionist cause.

“I said to the Lord, I’m going to hold steady on to you, and I know you will see me through”

Though most famous for her deeds on the Underground Railroad, Harriet Tubman had many other roles. During the Civil War, she helped orchestrate a rescue of hundreds of enslaved by military force, spied for the Union army, and volunteered as a hospital nurse. After the war, she advocated for civil rights and women’s rights, including suffrage.

In 1869, Harriet married again and later adopted a baby girl, giving her a chance for a happy family life. Through the rest of her life, she supported her community and worked to help others in need. Harriet Tubman died in 1913, after prolonged weakness.

“..and I prayed to God to make me strong and able to fight, and that’s what I’ve always prayed for ever since.”

One thought on “Harriet Tubman: A History In Quotations”