I love good living history centers! There’s nothing quite like seeing what life was like in by gone eras. So…if you’re in the Shenandoah Valley, be sure to add Frontier Culture Museum to your list of stops. Informative for adults and kids this site explores the regional history and cultural origins with engaging conversation,  restored buildings, farm fields, workshops, and real animals.

Let’s stop and take a look! 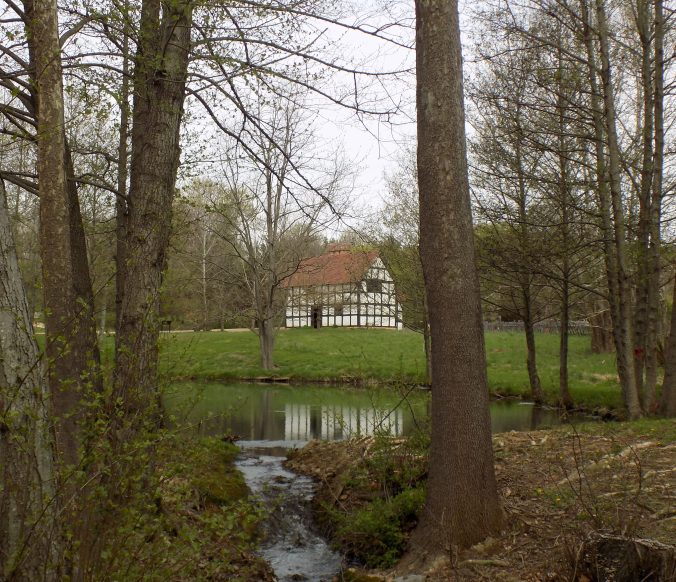 Frontier Culture Museum is located just off Interstate 81 in Staunton, Virginia. If you’re driving up (south) the Valley from Harrisonburg it’s about forty-five minutes from that town. Staunton also sits at the junction of highways from Richmond, so if you’ve been in the eastern part of Virginia and are taking a major highway into the Valley, you’ll likely be very close to the museum.

A living history interpreter at the Frontier Culture Museum

Signs in Staunton can guide you to the museum or use a GPS directional system. 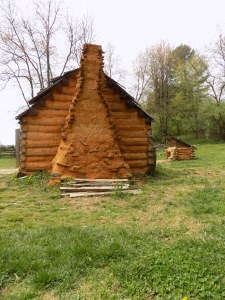 A replica cabin like the early settlers would have built.

For centuries, Native Americans inhabited the Shenandoah Valley region. Local tradition even claims that the valley’s name came from the native people’s phrase meaning “Daughter of the Stars.” The Warrior’s Road ran through part of the valley and some areas may have been accidental or even designated battlegrounds.

The first known European explorers to enter the Shenandoah Valley came in 1671; in 1716, more exploration took place, followed by pioneer settlers. Some came directly over the Blue Ridge Mountains via the many gaps. Others came south from Pennsylvania. A mix of European cultures melted into the Valley – English, Irish, Scots, and German primarily. Some settlers brought slaves with them, adding another origin and cultural story to the region: West Africa.

The museum grounds are laid out with two main sections: Old World and New World. Visit the Old World section first to see homes that the settlers inhabited in Europe and Africa, then venture to the other section to see Native American dwellings and the types of homes constructed by the settlers in America.

The English House, Irish House, and German House were actually built in Europe! The museum purchased the buildings as a preservation effort, disassembled them, and then carefully reassembled them at the museum. The West African village is an authentic reconstruction. Don’t be shy about asking the costumed interpreters about their projects, items in the rooms, the animals, or the crops in the field. There’s so much to learn about the culture, architecture, and farming techniques practiced in the Old World which influenced the settlement of North America.

In the New World side of the center, you’ll find replica Native American home site, a log and mud cabin, an 1820’s farmhouse and an 1850’s  home and outbuildings. You’ll see how the home layouts from the Old World translated into the new home constructed on the colonial  frontier and early American homesteads. Again, you’ll find a variety of living history details to explore. 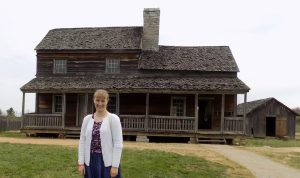 Got a little more time in Staunton, Virginia?

Pick up a historical guide for the tour (free pamphlet at the visitors center, library, or historical society) and take a drive or walk around town.

Check what’s on stage at the American Shakespeare Center!

Head over to the Woodrow Wilson Presidential Library.

I’ve enjoyed dining at The Depot Grille on several occasions, located in the old train station in the historic district.

Got lots of time? Drive east on Route 250 or Highway 64 to Rockfish Gap which offers a pretty view of the valley and overlooks where the Battle of Waynesboro took place in the American Civil War.