Did you know that Robert E. Lee moved to Lexington, Virginia, after the Civil War and served as president of Washington College?

A small chapel – built at Lee’s request – serves as a meeting place, museum, and final resting place and stands on the modern campus of Washington and Lee University. Let’s stop and take a look…

If you’ve been following the tour suggestions for Lexington sites, here are directions from Stonewall Jackson Memorial Cemetery to Lee Chapel with both driving and walking variations, due to one way streets! If you’re just arriving in Lexington, use a local map, signs, or a GPS to reach the location.

Walking: You can follow the driving directions or take a scenic stroll. Exit the cemetery and carefully cross Route 11/Main Street, heading south. Take White Street and walk through the neighborhood, consulting the historic walking tour map provided by the town, if you wish. Several of the homes in this area pre-date the Civil War. Go right at Jefferson Street. In a few blocks, go left on Washington Street, noting the large church (see Going Farther section). Take the College Campus pathway to the right and walk to Lee Chapel.

After Robert E. Lee surrendered the Army of Northern Virginia, he found himself in a difficult situation. His wife’s home and property – Arlington – had been confiscated. Some of his rights had been revoked due to his high profile role and battle victories for the Rebels during the conflict. Lee had hoped to retire to a quiet farm, get out of public view, and reconnect with his surviving family members. However, he soon realized that he needed a way to make a modest income and he was too much of a revered and influential leader to simply retire and leave his followers without words of wisdom as the United States entered the Reconstruction Era.

In October 1865, Lee accepted the position of President at Washington College – an institute of higher education that had been founded before the war and was now in difficult times also. Over the next years with his leadership, name, and influence, the college became one of the best colleges in the South. Lee took an active role as president, instituting an honor system for the students and taking a deep interest in the instruction, values, and character of the young men who attended.

On October 12, 1870, Robert Edward Lee died, probably from complications of a stroke or heart disease. He was laid to rest in a crypt beneath the chapel he had had built on the college grounds in Lexington.

In 1867, the college laid the foundations and started building this chapel, following a request from then-president Robert E. Lee. Crafted from brick and local limestone, the chapel was finished by the summer of 1868. In the following years, the building’s lower levels hosted Lee’s office, the YMCA, and treasurer’s office while the upper level functioned as a student chapel. 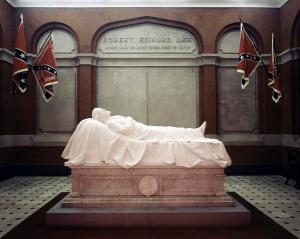 After Lee’s death and burial, the college added to the building, constructing a special room to hold Edward Valentine’s memorial sculpture of Lee and a crypt so the Lee Family could eventually be buried together. The sculpture – called “The Recumbent Lee” – is supposed to depict the general sleeping with in the field during the war, resting peacefully in a camp with his soldiers. Several original battleflags hang near the sculpture.

In the lower level of the chapel, museum rooms feature artifacts and history related to the Washingtons and the Lees. Robert E. Lee’s office has been “frozen in time” and appears the same way it was when he walked out for the final time in September 1870.

Through the decades, the chapel has been carefully preserved, restored, and reinterpreted. Today, security challenges have limited some areas of the buildings – including the room with the flags and sculpture of Lee, but most areas are at least visible and the museum rooms offer much to explore.

Often, the history books present Lee in the sage up to Appomattox and neglect to tell the rest of the story. Lee Chapel helps fill in the details about his life as college president and leadership voice in the early years of the Reconstruction Era.

Not far from Lee Chapel (and on the suggested walking route) stands Grace Episcopal Church. The Lee family attended this church while they lived in Lexington and it was pastored by William Nelson Pendleton who had served as an artillery general for the Confederacy.

Are archives your “happy place”? Check the online catalog for Washington and Lee University’s library and special collections. Some rooms and collections are available for walk-in research.

One thought on “Stop Here! Lee Chapel and Museum”