Today’s blog post takes a slightly different turn from the previous articles in this series. Earlier we’ve talking about Founding Fathers and their descendants who fought at Gettysburg.

Here, we move forward on the American History timeline to learn about a hero from the War of 1812 and his nephew who fought at during the Civil War. END_OF_DOCUMENT_TOKEN_TO_BE_REPLACED

This day has passed much as yesterday and the day before. The town is as full as ever of strangers, and the old story of the inability of a village of twenty-five hundred inhabitants, overrun and eaten out by two large armies, to accommodate from ten to twelve thousand visitors, is repeated almost hourly. Twenty are with us tonight, filling every bed and covering the floors. END_OF_DOCUMENT_TOKEN_TO_BE_REPLACED

Continuing with our short study on influential Founding Fathers and their descendants who fought at Gettysburg… Today, we’ll take a look at some Virginians – one who helped found the United States and one who fought for secession and the Confederacy decades later.

Here at Gazette665, we usually feature an American War for Independence theme in July. This year we’re adding a twist. I’ve found four Founding Fathers whose descendants fought at the Battle of Gettysburg which occurred in 1863 – 155 years ago this month. Prepare for some surprises!

Today, we’ll talk about the patriot Paul Revere and one of his grandsons… END_OF_DOCUMENT_TOKEN_TO_BE_REPLACED

(Spelling and emphasis is original)

Our artillery has now ceased to roar and the enemy have checked their fury, too. The time appointed for our charge has come.

I tell you, there is no romance in making one of these charges. You might think so from reading “Charlie O’Mallery,” that prodigy of valour, or in reading of any other gallant knight who would as little think of riding over gunners and sich like as they would of eating a dozen oysters. But when you rise to your feet as we did today, I tell you the enthusiasm of ardent breasts in many cases ain’t there, and instead of burning to avenge the insults of our country, families and altars and firesides, the thought is most frequently, Oh, if I could just come out of this charge safely how thankful would I be! END_OF_DOCUMENT_TOKEN_TO_BE_REPLACED

“No, we’re not spies,” the commander said. “I am General John Buford. These are my staff officers. We have a division of Union cavalry coming behind us on the road.” ~Excerpt from Blue, Gray & Crimson

On June 30, 1863, Union General John Buford and his cavalrymen arrived in Gettysburg. The commander’s decisions and his troops’ tenacity would be crucial to the northern cause. Buford’s previous life and military experience made him one of the best leaders for such a time as Gettysburg.

Born in 1826, John Buford spent his childhood in Kentucky and later moved with his family to Illinois. He spent a lot of time working around horses and became a skilled rider. Buford received an appointment to West Point and graduated in 1848, just missing the Mexican War. (He graduated 16th out of 38 cadets, and some of the generals he would fight against at Gettysburg had been his friends at West Point.)

Buford served in the U.S. Dragoons (cavalry) and had frontier duty in Texas, New Mexico, Kansas, and Utah. Forming part of a “peacekeeping” expedition in Bleeding Kansas – the 1850’s battleground between abolitionists and slave holders – he must have sensed the sectional division that would tear America apart during the Civil War.

The years of equestrian combat and scouting in the west built Buford’s skill set and gave him the experience he would use during the Civil War. He also read military manuals and believed a skirmish line would be important in battlefield warfare.

When the Civil War began, the South offered John Buford a military position, but he declined. During 1861, he served as an assistant inspector general of fortifications near Washington D.C. The following year he became a reserve commander of cavalry and fought at the Second Battle of Bull Run (Manassas) in late August and was severely wounded.

He recovered and became chief of cavalry for the rest of 1862. When the cavalry was re-organized in the spring of 1863, Buford got a brigade which he led on a daring raid in May 1863. His skill as a raider and scout were recognized.

“Hold at All Costs” by Mort Kunstler http://www.mortkunstler.com/html/store-limited-edition-prints.

By the Gettysburg campaign, Buford was commanding a division of Union cavalry and an artillery unit. Riding ahead of the main Union army, Buford probed the mountain passes and lightly skirmished with Confederate soldiers. He arrived in Gettysburg, heard reports from the local civilians, and spotted Confederates to the west of the town.

Using his military skills and trained eye, Buford realized that the hills near Gettysburg could provide an amazing defense position for an army. He worried what might happen if the Confederates secured the position first. (General Meade had been anticipated a defensive battle, but on a different line which was a little farther south.)

Buford determined to hold off the Confederates and, on the evening of June 30th, sent messages to the infantry commander directly behind him on the march, asking for re-enforcements in anticipation of the fight.

The fight did come. Throughout the morning of July 1st, Buford’s troops fought in a dismounted, skirmish formation, contesting every backward step of ground and forming a final defensive line along Seminary Ridge. Anxiously, Buford sent messengers, watched the fight, and scanned the roads from the vantage point of the Lutheran Seminary’s cupola, watching for infantry re-enforcements.

The infantry came and Buford withdrew his men for a few hours. The battle became an infantry and artillery fight, but when the Union lines collapsed around 4pm, Buford’s cavalry covered the retreat, and the general played a large role in calming the fearful infantrymen.

Other Union commanders agreed with Buford’s assessment of the Gettysburg high ground, and they adopted his choice as the winning defensive position for the army. 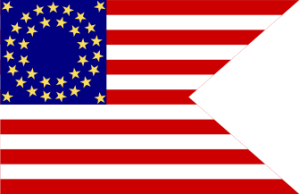 Though John Buford and his cavalry had “guard duty” throughout the rest of the battle, the general’s wisdom and his troops’ will to “hold this ground” helped secure the Union victory at Gettysburg.

During the autumn of 1863, John Buford and his cavalry accomplished several exciting raids into Confederate territory, returning as heroes. But the hard work wearied and wore down the general. His men began to notice that he did not look well.

In December, Buford – who probably had typhoid fever – left the army, intending to regain his strength at a friend’s home in Washington D.C. His condition worsened, though. John Buford died on December 16, 1863 – on his death bed he was presented with a major general’s commission from President Lincoln.

In the Book of Esther in the Bible, the young queen is told “…yet who knows whether you have come to the kingdom for such a time as this.” (Esther 4:14) She gathers her courage, prays and fasts, and then goes to the king, begging that the lives of her people be spared. (The king grants her request…in case you didn’t know that already).

Wait a second! you might be thinking – this is “Back to Gettysburg Tuesday” so why are you mentioning an ancient Persian queen?

Because people are placed in certain locations or situations for providential reasons, and this certainly seems clear in the life of Gettysburg general, John Buford. When we consider Buford’s experience, skill, and knowledge and realize he lived only five months after the Battle of Gettysburg, we see God’s providence as He prepared John Buford for such a time as Gettysburg. He was the cavalry commander with exceptional scouting skills and the iron determination to hold a position to give his side the ground for victory.