Fun Fact: I’ve visited all 21 of California’s Missions. It took three trips up and down the coast of our state, but my family did it!

The California Missions were founded in the late 1700’s and early 1800’s by Franciscan Padres who wanted to share their religion with the Native Americans and lay a “solid” religious foundation for the new Spanish Colony that California was supposed to become. The missions’ structures were built of handmade adobe bricks. (Adobe is basically a fancy word for mud.) Controlling land belonging to the Catholic church, each mission had agricultural objectives or trades, allowing the Native Americans to learn skill sets, received education, and better standards of living. 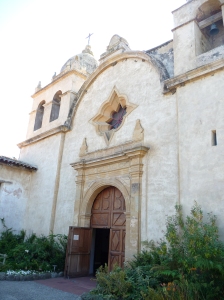 Gorgeous and regal, this mission is beautifully restored. It was Father Serra’s favorite mission and home for many years. (Father Serra founded many of the California Missions.) Not far from Monterrey Bay, Mission Carmel has unique architecture and beautiful gardens.

I am especially fond of the star shaped window in the church and the huge pink blossoming bougainvillea in the courtyard. 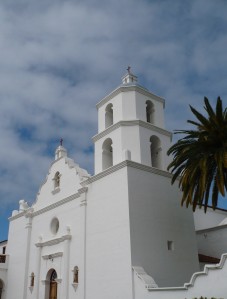 Just a hop, skip, and a jump from my hometown, Mission San Luis Rey stands in Oceanside, California. Called the “King of the Missions”, this mission has many well preserved features. Parts of the original aqueducts and clothes washing area still exist. The Church is very beautiful.

One of my favorite features is the original arches at the front of the building; if all is quiet and you can imagine the sounds of traffic are wind in the fields, then it’s almost like it might have been two hundred years ago. 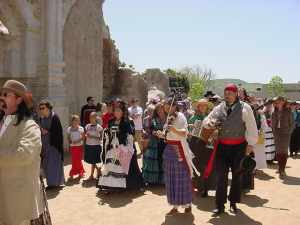 Located in the town which bears it’s name, Mission San Juan Capistrano wins the prize for most beautiful gardens. The courtyard and surrounding grounds are gorgeous, especially during the spring.

On special days, volunteers present living history programs at this mission. One time we were fortunate to witness a re-enactment of a Spanish wedding and the music and dancing of a wedding fiesta. 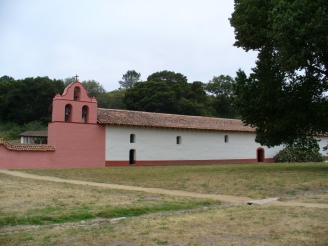 La Primisma – located near Lompoc –  is actually a California State Park and it’s been restored to a “working” mission. You can wander through the buildings, explore the gardens, fields, and animals, and maybe even interact with a living historian.

This mission is on my favorites list because it helps us understand the agricultural and trade importance of the mission system…and you get to see it, up close! 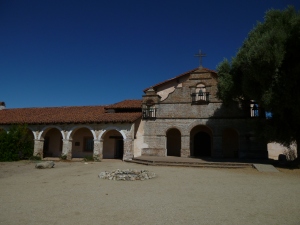 San Antonio is far off the well-traveled path. It’s actually located on a U.S. military base. If you chose to visit, I highly recommend entering by the main road and leaving by the main road – highway G18 looks like a short cut, but it is a horrifying drive with steep cliffs…just trust me!

Anyway, back to the mission. San Antonio is pretty, but the architecture and little museum are similar to many other missions. What makes this mission a destination is it’s surroundings. There’s nothing but golden hills and oak trees as far as you can see…and only the little dirt road and your car remind you that you haven’t time traveled. 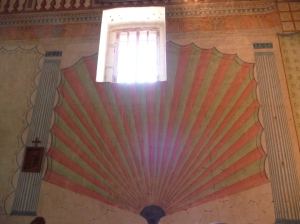 The first time I saw Mission San Miguel it was surrounded by a chain link fence with warning signs. A recent earthquake had damaged the structure. A few years later I went back; the repairs were complete and it really is a charming little building.

One of the unique things about this mission is it’s artwork. The interior of the church was painted by the Native Americans who lived there. They incorporated Spanish influenced borders with images of their prized sea shells to make an impressive blending of cultures in fading pastel paint.

I’m so glad my parents incorporated visiting the 21 California Missions into our family vacations. We’re not Catholic, but we learned to appreciate the unique history, architecture, and features of each mission.

Oh, and one other thing we learned (and mother insisted I should mention it), if you want to slow down and enjoy the historical value and details of the missions, don’t visit on a festival day. It tends to be a carnival atmosphere and it’s hard to imagine Colonial California at that time. 🙂

P.S. Have you visited some of the California Missions? A mission elsewhere in the American Southwest? Tell us in a comment!

Well, the first thing might be: who was Juan Rodriguez Cabrillo? He was a soldier in the Spanish army that fought the Aztecs of Mexico. He was one of the wealthiest men in New Spain. And he discovered California.

It seems appropriate to launch our “Golden History – California” blog series for September 2015 with an introduction to the Spanish explorer who discovered and claimed California. It also seems fitting to share this today because the replica of Cabrillo’s ship – “San Salvador – makes it’s debut in San Diego’s Festival of Sail today! (I’d love to be there, but my favorite era claims me and I’m off to a Civil War re-enactment in Huntington Beach…)

Now, let’s “meet” Cabrillo and discover 5 facts about his life!

Well, from the Iberian Peninsula is the one safe answer. It’s not known precisely if he was Spanish or Portuguese, though the matter is under investigative research by skilled historians and may be conclusively resolved soon.

It is important to remember that Cabrillo – no matter where he was originally from – was well-versed the Spanish culture, fought in the Spanish armies, and claimed California for Spain.

2. Cabrillo fought the Aztecs with Cortez

In 1519, Hernan Cortez took an expedition of soldiers, landed on the shores of Mexico, and marched inland, looking for land and gold. The natives thought the Spaniards were gods and, for a while, the “conquest” was “easy.” The Spanish rallied the native tribes who hated the Aztecs, making those fierce warriors angry. Fierce conflict began.

Juan Cabrillo is listed in Cortez’s records as a conquistador during the conquests of the Aztecs. He was a commander of a unit of crossbowmen.

3. Cabrillo was one of the wealthiest men in New Spain

Following the conquest of the Aztecs, Cabrillo continued his soldier of fortune experiences, moving south with the Spanish armies. Eventually, he settled and owned property in Guatemala, helped found the city of Santiago, and became one of the most important men in the colony.

He married Beatriz Sanchez de Ortega and they had two sons.

Cabrillo oversaw the fledgling industry of shipbuilding along the Pacific coast. But several of the ships were wrecked and Cabrillo’s fortune was jeopardized; perhaps a trading voyage to China would stabilize he fortune. Thus, an expedition was planned; Cabrillo would be the commander, and they would sail and discover…

In 1542, Cabrillo left the Port of Navidad with three ship and sailed northward to explore the land above Baja California. Aboard his flagship “San Salvador”, Cabrillo entered San Diego Bay on September 28th and claimed the land for Spain; he named the bay “San Miguel” (but later explorers changed the name).

Cabrillo and his men continued sailing up the California coast, fighting the southward bound “California Sea Current.” They missed San Francisco Bay, but sighted Point Reyes before turning south to winter in the Channel Islands.

5. Cabrillo did not survive his expedition

In an attempt to rescue his men who were under attack by natives, Cabrillo splintered his ankle. The injury did not heal and became infected. Juan Cabrillo died on January 3, 1543, and was probably buried on one of the Channel Islands.

Cabrillo’s men continued the expedition, though, and sailed north again in the spring. They may have reached the Oregon coast before returning to Mexico with their reports.

Why is Cabrillo Significant in History?

Cabrillo was the first known European to set foot on the California coast. His claimed territory for Spain would become a Spanish Colony, Mexican Province, independent republic, and a state of the United States of America. Cabrillo’s discovery unlocked mysterious California and ushered in the era of European – and later American – influence on the West Coast. 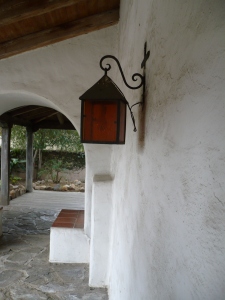 It’s September and back to school time for the kids!

This month on Gazette665, we’ll celebrate the history and heritage of my home state: California. Friday blog posts will explore California and some of my traveling adventures through the state.

Here’s the big news: There’s a new historical resource page in the History Learning Center devoted just to California History. Find recommended books, a photo board, and places to explore on the new webpage!

If you’re not from California, don’t despair…leave me a comment and tell me the state where you live and I’ll consider it for a blog post next month!