Oh, wait you mean there was another. Huh? I thought Lincoln was assassinated after the war ended.

You’re correct. But think…Confederacy, South, Montgomery, Richmond… Do you know the answer yet?

Jefferson Davis…who’s he? (That’s why I’m writing this blog post, which is a bonus post in our Presidents’ Month.)

Jefferson Davis was one of the few Americans who was president of a separate nation on former or future United States land. (We’ll talk about the other man next week). 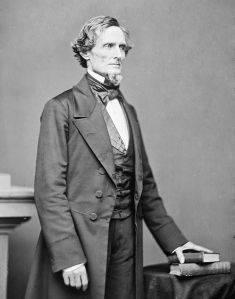 Before The War Between The States

Jefferson Davis was born on June 3, 1807 or 1808; there’s a debate on which year is correct! He lived in Kentucky, Louisiana, and Mississippi in his youth. He attended West Point during 1824-1828, graduated 23rd in a class of 33, and played a minor role in the Black Hawk War.

Jeff fell in love with Sarah Knox Taylor (daughter of General Zachary Taylor; Z. Taylor was later a U.S. President); Mr. Davis and Miss Taylor were married after he resigned from the army in 1835. Weeks later, Sarah Taylor Davis died of malaria or yellow fever, leaving a broken hearted husband, who retreated to his plantation and a life of solitude.

Five years later Jeff Davis entered politics with the Democratic party (note: at the time, the Democratic party was politically conservative). In 1845, he married Miss Varina Howell; their marriage would last 44 years, and they would have 6 children. During the Mexican-American War (1846-1848), Jeff Davis served with the United States Army; after the war, he represented Mississippi in the House of Representatives, and, later, the Senate. He was secretary of war under President Franklin Pierce.

“I worked night and day for twelve years to prevent war, but I could not. The North was mad and blind, would not let us govern ourselves, and so the war came.” ~ Jefferson Davis

When Mississippi – his home-state – seceded, Jefferson Davis made a farewell speech in the Senate, and, then, taking his family, returned to his home. He hoped to receive a military commission from the Confederate government and planned to wait at home until summoned.

Elsewhere, leaders of the new, loose-union of Southern states were looking for a leader: a president. Perhaps it is easily to appoint or nominate someone not present to reject the position. Perhaps his political leadership skills had impressed the assembled gentlemen. Perhaps none of them wanted the job of trying to bring order to a fledging nation. Whatever the reasoning, the out-come was decisive: Jefferson Davis was appointed President of the Confederacy.

When the message with the news arrived at the Davis home, Jeff was not excited. According to Mrs. Varina Davis, her husband appeared “so grieved that I feared some evil had befallen our family.” Though clearly concerned about the new position and disappointed to not have a military field command, Jefferson Davis accepted the appointment and went to serve the Southern states.

And so, the long four years began with the inaugural ceremony on February 18, 1861, in Montgomery, Alabama.

After his inauguration, Jefferson Davis wrote that despite the excitement of the people, he saw the future roads of his life and the Confederacy covered with “troubles and thorns innumerable.” Sadly, he was right.

Still, Jefferson Davis never gave up his beliefs, his hope, his faith, or his courage.

Despite all the troubles surrounding the Confederacy, President Davis’s courage never failed. He was always looking for the next plan, the next victory.

It would be wrong to not mention the support and encouragement he received from his wife and family. The Davis family remained at the White House in Richmond (the capital had been moved from Montgomery, Alabama, to Richmond, Virginia, in 1861) for most of the war years. Mrs. Davis was an excellent hostess, acknowledged for her grace and kindness. The children usually had freedom to roam the executive mansion, peering in on important war councils and meetings.

In the end, the Confederate troops were out-numbered, Richmond was captured, and the president and his family were forced to flee. Always hopeful, Jefferson Davis planned to escape toward Mexico. Unfortunately, he was captured and forced to spend several years in prison, while government leaders of the United States awkwardly tried to decided what to do with the Confederate president.

Eventually, partly through the efforts of his wife, Jefferson Davis was released from prison. He was never brought to trial. Until his death in 1889, Jeff Davis endured harsh criticism for being “the other president.” 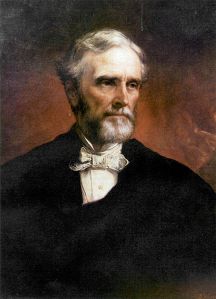 Dear reader, I don’t know what your thoughts and feelings are about the South and the Confederacy during the War Between The States. But, I’m asking you to lay aside the politics, and remember a forgotten president.

He was an American, who believe in the principles of self-government and state’s rights. He was a leader who laid aside his personal preferences and served where he was most needed. That’s a legacy to remember…and it should inspire us!

P.S. I’d like to hear your thoughts… Did you know who “the other president” was?

Want more about the Davis Family? Leave a comment and let me know…then check here for information about The Confederate White House Living History.