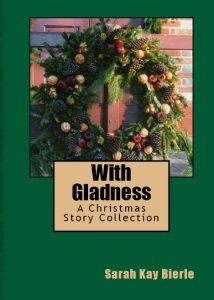 Earlier today, I made an official announcement: there’s a new historical fiction book published by Gazette665.

With Gladness: A Christmas Story Collection is our second publication and is releasing this Friday…just in time for the holiday season. You can find lots of information here or order your signed copy in our store.

We’re also starting something new…a third blog post each week. Look for them Wednesdays. The series is “Christmas on Wednesday” and each article will highlight holiday celebrations and historical background on the stories in With Gladness.

Today we’ll kick-off the series with a look at some Christmas traditions in Colonial America. END_OF_DOCUMENT_TOKEN_TO_BE_REPLACED 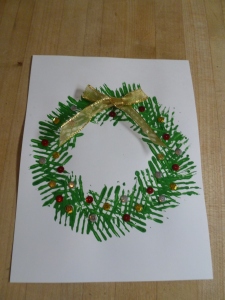 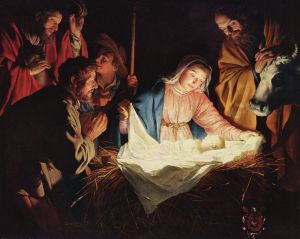 We usually describe the first Christmas as the event in the City of Bethlehem when Jesus – God’s Son – was born. Fulfilling Biblical Old Testament prophecy, Jesus came to earth as a baby, was born in a Bethlehem stables, and laid in a manger. Angels announced His birth to nearby shepherds, and later wise men from the east came to see Him. (Luke 2, Matthew 2) But it wasn’t until a long while after Christ’s birth that His birthday started to be celebrated…and His birthday probably wasn’t even in December.

December became the month of celebration because some of the religious folks decided to “Christianize” a pagan holiday. You see, the Romans had a feast for one of their false gods in December; it was called Saturnalia and was celebrated with gift giving and red and green decorations. The Roman Church eventually took some of the Saturnalia traditions and combined them with some religious beliefs and called it “Christmas” – trying to make Christ’s birth the focus of their new holiday.

Some of our favorite Christmas traditions also have roots from the past. Did you know that Martin Luther – the Protestant reformer – was said to have cut one of the first Christmas trees for his children? And a few centuries later Queen Victoria of England popularized Christmas trees in England and America. Do you like the poinsettia flowers? Those were traditionally used in Mexican celebrations of Christmas.

One of my favorite Christmas decorations is a wreath. Wreaths have been used for centuries to display the beautiful, natural woodland plants and to welcome guests for celebrations. Today, I’ll share an idea for making a wreath of your own! 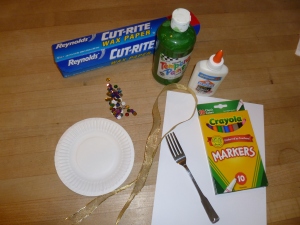 The Lid From A Pot 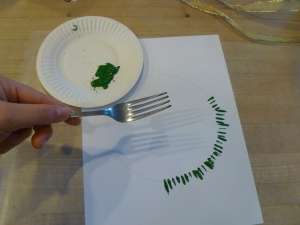 Begin by tracing around the pot’s lid on your cardstock to make a perfect circle.

Spread some wax paper to keep the table clean.

Next, put some green paint on the paper plat and dip the flat part of the fork in the paint. Press the fork onto the paper, using the circle to guide you. (See photo). 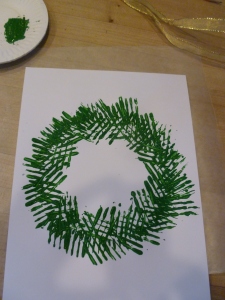 Continue “fork painting” until your wreath is full and even.

Let the paint dry for a few hours.

Tie the ribbon into a pretty bow and decide how it will be placed on the wreath. I put mine at the top, but it really could go anywhere you like. Glue in place.

Glue sequins on the “greenery” of your wreath. Let it dry for a while.

Your wreath is finished. Let the decorating begin…

We wish you a very Merry Christmas and Happy New Year!

Last Saturday (December 13, 2014) I helped place fresh evergreen wreaths on the graves of veterans and fallen soldiers in Miramar National Cemetery. It was a thought-provoking event. At a certain moment thousands of people in that cemetery (and in cemeteries across America) laid a wreath on a grave and said the hero’s name aloud. Our defenders are not forgotten.

The organization, Wreaths Across America, seeks to “Remember, Honor, Teach” by working with communities to provide wreaths for the graves in national cemeteries. Local and national organizations can donate to help pay for this service. It was special to see so many local organizations coming together to donate and help place the wreaths: Civil Air Patrol, Young Marines, Sea Cadets, Boy Scouts, Girl Scouts, Daughters of the American Revolution, Sons of Confederate Veterans, Active Military, Military Wives’ Clubs, and ordinary citizens.

I was honored to place a wreath on the grave of a neighbor and dear friend. Later, I placed wreaths on the graves of people I didn’t know. It was a moving experience to trace the chiseled name and say it clearly in the still air before laying the wreath on the white marble.

In the hustle of the Christmas season it was appropriate to take a moment to remember our fallen defenders, to pray for their families, and thank God for our service members serving today.

Here are some photos from the event. (Click on one photo to view all as a gallery).

“I placed a wreath…”

Our heroes are not forgotten…